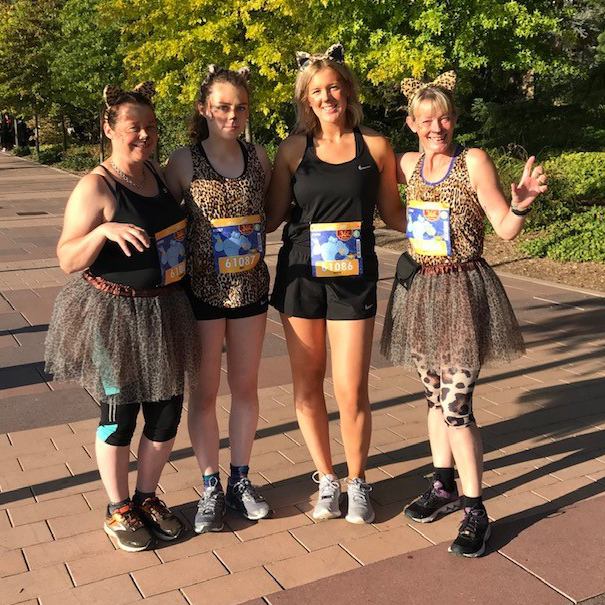 Are you sitting comfortably? Got a cuppa and a snack? It’s a long one…

In October last year, I had just taken part in the 36K challenge at Disneyland Paris race weekend with my good pal and fellow Dolly Claire. We had a fantastic time (apart from the eventful journey home, which you really couldn’t make up and is a story for another time!) and I was itching to get started on my next daft idea. I spend most of my non-working days fundraising for The Harry Johnson Trust, the charity I set up in memory of my little boy to help Shropshire and Mid-Wales children with cancer and their families, it has become my life mission and I love doing it. Lots of people kindly fundraise for us, but I like to have a few things on the go myself to fundraise too.

I only took up running in April 2018 because I had seen that Disneyland Paris did a half marathon, and that year it fell on Harry’s birthday. Harry loved Disneyland and so it seemed like fate. The power of Facebook advertising sucked me in and before I knew it I had signed up, and convinced Claire and two other buddies to come with me. My Mum laughed when I told her. So did my Dad. My husband looked at me in disbelief. Neither Claire nor I had ever run a step (I spent most of my teenage years smoking, drinking and avoiding any form of exercise) and my friends were the same – it was a huge challenge for all four of us. We went from couch to 21K in just over four months! off we went, full of excitement and nerves. I really struggled to do the last two miles at Disney on race day, Claire had to virtually carry me to the finish line, but we all did it and raised just under £7000 between us. And I was hooked. The atmosphere was incredible. I was a runner!!

On the Eurostar on the way home, Claire and I had a very bad case of medal envy – Disney medals are quite simply amazing. Fellow runners who had taken part in all of the races that weekend were proudly displaying five, yes FIVE, glorious huge shiny medals and were flashing them around the carriage and comparing stories. So when I got home, I signed Claire and I up for the following year (she did know!), and six other supporters too, and we did the whole shebang in September 2019 – 5K on Friday night, 10K on Saturday morning and 21K on Sunday morning. Five medals (5K, 10K, 21K, plus the 31K challenge and 36K challenge) and some snazzy race t-shirts later, I felt such pride and again we had raised thousands for the charity. All in fancy dress too. 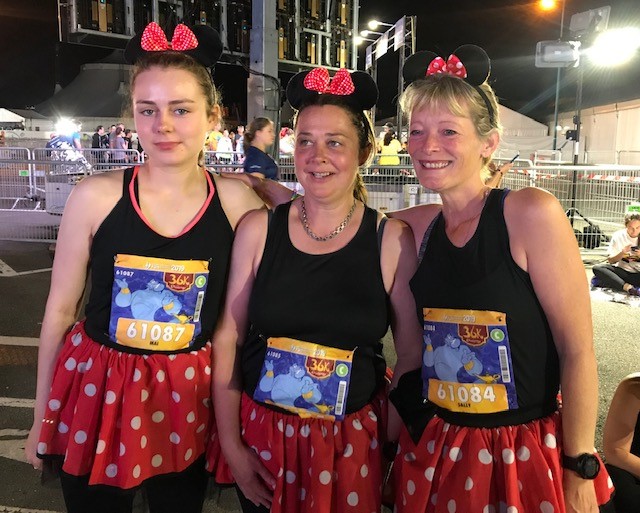 What could I do to beat that? Back to last October…

Then I saw a Facebook post for the London Marathon, and you already know what a sucker I am for ads on social media…next thing I know I have a place running for Children With Cancer UK in April 2020! Oh, and Claire suggested we did The Great North Run too, so we signed up to run for Make A Wish UK. I think she saw that on Facebook too.

With three charities as my focus, all three of which mean the world to me, I had to set about fundraising, My target for the year was £3000, £1000 for each charity and with lots of half marathons within reasonable driving distance from home, I signed up for 11 half marathons in 2020 and bought some new trainers!

The problem was finding a race in January – nobody seemed nutty enough to be organising one so I decided to do it myself – with a little (well a lot) of help from my Dolly friends. Off we went from Welshpool to Newtown, 13.1 miles (although I think it was nearer 14 miles by the time we got to the pub), a nice lunch and then the train home. Lots and lots of Dollies came along and we had a wonderful day. Thank you everyone!  Some ran all of it, some met us along the way, some crazy people even ran back (you know who you are). It was brilliant, what a start to the challenge!

February’s race was the Wrexham Half-Marathon, but flooding put paid to that one so I did the virtual race instead and still received my lovely medal.

March was a St David’s Day Anglesey Half-Marathon, accompanied by Karen Roberts who I roped in at the last minute on the promise that the route was reasonably flat. Um, well, the original route is flat, but floods, storms and fallen trees saw the route changed twice, once the night before, and it turned into a stroll up a vertical hill!! On the plus side we got lots of crisps at the end, which is always a welcome treat.

From my blatherings so far, you will have gathered that the first three months of my 2020 Challenge didn’t particularly go to plan. I should have known it was an omen…Covid hit and put paid to all the other races for the rest of the year. BUT I have still run a half marathon every month so far this year as I promised to, solo doing loops near home during lockdown earlier in the year, and with Dolly friends in my local area (thanks Karen, Claire, Caron Atherton and Jo Breeze for the company and laughs) when we were allowed.

I even did the London Marathon ‘Your Race Your Way’ last month, again spurred on by the company of some amazing friends and Dollies who took it in turns to keep me going on different sections of the run, sticking to the ‘rule of six’. Thank you to the Dollies already mentioned, plus Sally Senior, Mandy Cooke, Sharon Davies, Jill Myles, Linda Morrell and Emma Hughes (hope I haven’t missed anyone!). I honestly wouldn’t have done it without them and we even had some fun waving at cars and cheering other marathon runners on around town.

Two more half marathons to go – November and December – and I will have completed my 2020 Challenge. At the time of writing, I am nearly at £7000, more than double my target, which means that each charity will receive over £2000 each. How amazing is that! Had I known at the start of the year that 2020 would turn out to be such a challenge to everyone I might have been put off trying. But do you know what? Running and the friendships I have made through Dollies have kept me sane. Sane from the never ending grief of losing my little boy, sane from the stresses of work and family life, sane during lockdown, sane during uncertain times. But more than anything Dollies have made me HAPPY to be a runner, although I am a slow one. Thank you folks 🙂

And you know all the races that were cancelled this year? Most are resheduled to next year and beyond (fingers crossed), so here comes the 2021/2022 Challenge…… 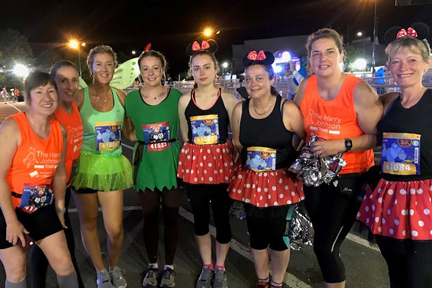